Here's how covered interest parity works. Think of two ways to invest money, risklessly, for a year. Option 1: buy a one-year CD (conceptually. If you are a bank, or large corporation you do this by a repurchase agreement). Option 2: Buy euros, buy a one-year European CD, and enter a forward contract by which you get dollars back for your euros one year from now, at a predetermined rate. Both are entirely risk free. They should therefore give exactly the same rate of return, by arbitrage. If european interest rates are higher than US interest rates, then the forward price of the euro should be lower, enough to exactly offset the apparent higher return.  If not, then banks can (say), borrow in the US, go through the european option, pay back the US loan and receive an absolutely sure profit.

Of course there are transactions costs, and the borrowing rate is different from the lending rate. But there are also lots of smart long-only investors who will chase a few tenths of a percent of completely riskless yield. So, traditionally, covered interest parity held very well.

An update, thanks to "Deviations from Covered Interest Rate Parity" by Wenxin Du, Alexander Tepper, and Adrien Verdelhan. (Wenxin presented the paper at Stanford GSB recently, hence this blog post.)

The covered interest rate parity relationship fell apart in the financial crisis. And that's understandable. To take advantage of it, you first have to ... borrow dollars. Good luck with that in fall 2008. Long-only investors had more important things on their minds than some cockamaime scheme to invest abroad and use forward markets to gain a half percent per year or so on their abundant (ha!) cash balances.

The amazing thing is, the arbitrage spread has not really closed down since the crisis. See the first graph. [graph follows]

What is going on?

Du, Tepper and Verdelhan do a great job of understanding the markets, the institutional details, and tracking down the usual suspects. Their conclusion: it's real. Banks are constrained by capital and liquidity requirements. The trade may be risk free, but you need regulatory capital to do it.

A great indication of this institutional friction is in the next graph [graph follows]: 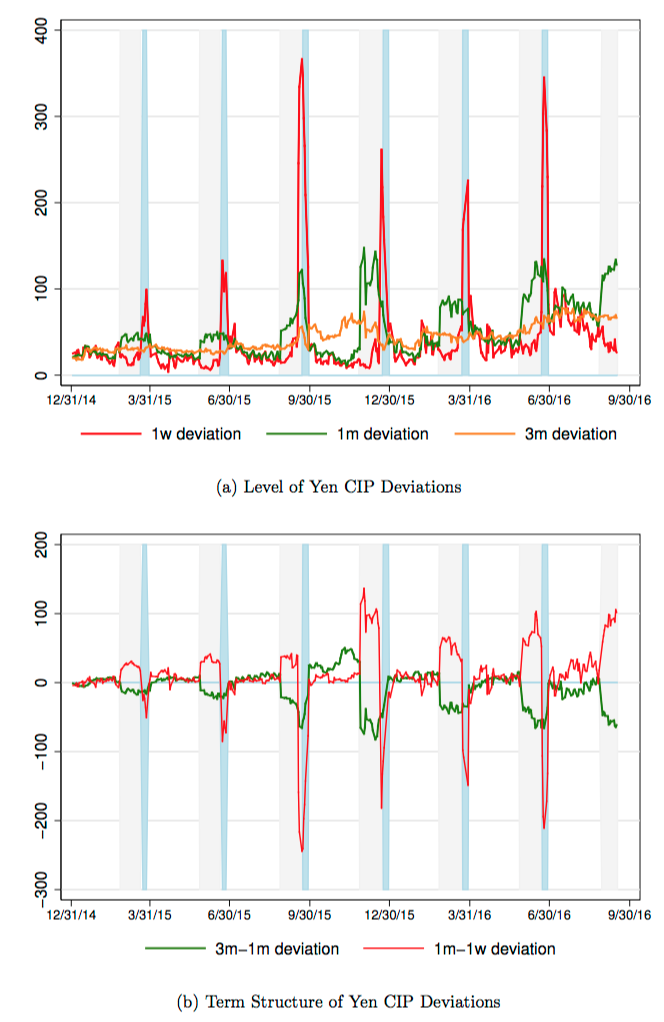 So far, so good, but reflect really: this makes no sense at all. Banks are leaving pure arbitrage opportunities on the table, for years at a time. OK, maybe the Modigliani-Miller theorem isn't exactly true, there is some agency cost, and the cost of additional equity is a little higher than it should be. But this is arbitrage! It's an infinite Sharpe ratio! You would need an infinite cost of equity not to want to eventually issue some stock, retain some earnings rather than pay out as dividends, to boost capital and do some more covered interest arbitrage.

At the seminar a pleasant discussion followed, centering on "debt overhang." If a bank issues equity and does something profitable, this can end up only benefitting bond holders. I'm still a bit dubious that this is what is going on, but it is a potential and very interesting story.

But that's still not enough. Where are the hedge funds? Where are the new banks? If an arbitrage opportunity is really sitting on the table, start a new fund or bank, 100% equity financed (no debt overhang) and get in to the business. Especially at quarter end. Really, is there nobody with spare "balance sheet capacity" to grab these quarter end window dressing opportunities? Apparently, low-cost access to these market is limited to the big TBTF banks, which is why hedge funds have not leapt in to the business? (Question mark -- is that really true? ) Still, why not start a money market fund to give greater returns by going the long end of the arbitrage? Alas there are regulatory barriers here too, as even a riskless arbitrage fund can no longer promise a riskless return.

These are the remaining questions. The episode in the end paints, to me, not so much the standard picture of limits to arbitrage. It paints a picture of an industry cartelized by regulation, keeping out new entrants.

But they are great graphs to ponder in any case -- and a good paper.

So if you start with dollars, you can make 0.98% if you just buy a 1yr T-bill, and 1.57% if you change your dollars to yen, buy a 1yr Japanese t-bill with the money, and enter a 12mo currency forward to change your money back into dollars at the end of it all.  So the arb, which you can lock in for 1yr which is a pretty long time, is 59 bps right now.

[JC: Notice the trade is to buy yen, not dollars. This is a point made in the paper which I didn't cover well enough. There is a big flow of money the other way, borrowing yen, buying dollars and not hedging, since statistically currency depreciation does not soak up the interest differential.]

But a hedge fund can’t lever that trade up.  Hedge funds to a first approximation can’t borrow uncollateralized. They can but unsecured lending to a hedge fund would be at least risk-free plus 200bps and so would destroy the arbitrage.   And while getting leverage on T-bills (for example) is securitized and so the cash is borrowed at a rate that allows the arbitrage, you can’t net generate cash by buying a t-bill (you can borrow the cash to pay for the t-bill and pledge the t-bill as collateral, but you aren’t left with cash you can do whatever you want with after that transaction).  So the hedge fund can’t generate more USD cash in order to turn it into yen, buy Japanese T-bills, etc.

It only works for banks because they have access to unsecured borrowing (deposits) at a rate that allows the arb.  Which hedge funds don’t have access to. [JC: my emphasis]

This pops up in other markets too btw, the ability to get an extra 50 bps or so by using USD cash, if you are willing to do a little gymnastics.  For example, you can go long the S&P 500 with either futures (a synthetic instrument; just a bet) or via an ETF (a cash instrument that requires you to pay for it).  The rolls on S&P futures are priced such that your return from rolling a long S&P 500 futures position is about 50 bps (annually) lower than your return from just buying an S&P ETF.  But the levels at which dealers which provide leverage for long-only equities positions take that 50 bps back again, so you can’t lever up the arbitrage.

My model of this fwiw is:

-after 2008 various regulatory constraints and reg cap requirements made this not attractive for big banks unless the spread approachs 100 bps, so they are not really players any more

-there are some players that will do this.  The biggest are reserve managers.  The second biggest are probably  hedge funds using excess cash balances (not sure how big corporates with cash balances are in this space).  But that’s not enough to make markets efficient. [JC: Sovereign wealth funds, endowments, family offices...?]

-in general there is a huge universe of people trying to enhance yields on cash.  It seems like those folks should be able to close the gap here.  But most of them (for example money market funds) have constraints that won’t let them do these sorts of trades. [JC: I think currently even though investing FX covered forward is risk free, you would have to offer a floating value fund for that investment.]

-I assume eventually the market will do what you think it should, and the people seeking to enhance their cash returns will find these trades and structure themselves in a way they can take advantage of them.  But it has taken a lot longer than I thought. [JC Me too. From which I learn that competition, entry, and innovation in banking is a lot less than I thought.]

My two comments on this: one, it makes a great case for much larger capital requirements! Second, if capital won't flow in to current banks to take an arbitrage opportunity, the other answer is new banks. Back to regulatory barriers to entry. 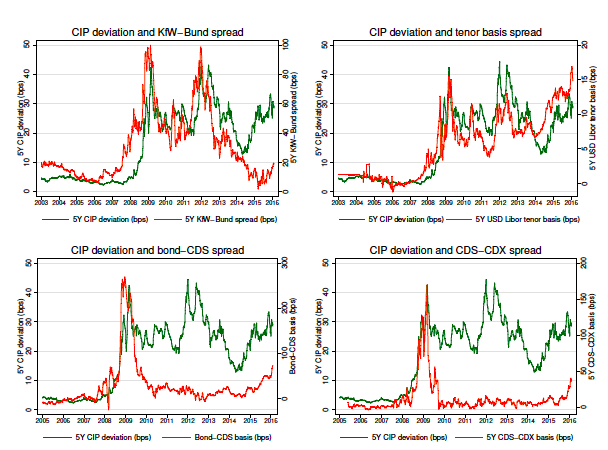 Liao also points to an interesting channel. Corporations can issue debt at the corporate bond rate to invest in arbitrages. Capital will flow, in interesting ways. He also points out that hedge funds integrate the term structure of CIP, smoothing out the deviation across different maturities.

To Gordon this is about limits to arbitrage and segmentation. But once several asset classes get segmented together, they stop being so segmented. When multiple spreads are all moving together one also sees a generic risk premium start to emerge.