(This is a continuation of Wealth and Taxes, part I.Part III follows.  See theoverview for a summary. The punchline comes inPart V.)

A second asset pricing perspective helps us to digest "wealth," its distribution, and whether we should care. 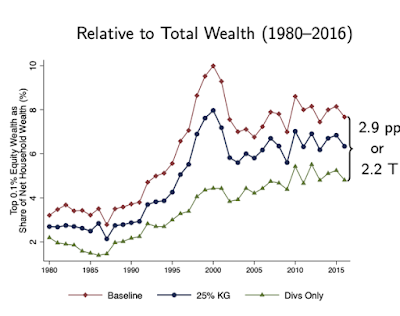 Here is anotherSmith, Zidar and  Zwick  graph showing the top 0.1% share of wealth (as they define and measure wealth). (Reminder. The game here is to start with selected income streams, then divide them by a rate of return to produce large wealth numbers. $100 income / 0.01 interest rate = $10,000 of wealth.) The "baseline" case capitalizes realized capital gains, which I argued last time was a pretty crazy thing to do. The bottom line treats only dividends. If dividends are properly measured, the value of the firm is the value of dividends only and repurchases are irrelevant.

The graph makes the obvious point that "capitalizing" capital gain "income" is an important assumption to driving up the appearance of wealth inequality.

But it makes a deeper point, my focus today. The top graph is pretty much the graph of the S&P index. This illustrates visually a deeper point:

We compare Bob to Sally, who earns $100,000 per year wages and has no assets. The distribution of income and of consumption is entirely flat. But the distribution of wealth was already concentrated: Bob had  $1,000,000 of wealth, because we ignored Sally's human wealth, the present value of her salary. Now wealth inequality is 10 times worse, because we also ignore the higher capitalized value of Sally's human wealth.

But why should we care? Bob and Sally are both marching along unchanged.

People don't want to consume in one big spurt. They want to spread consumption out over their and their heirs lifetimes. When the interest rate goes down, it takes more wealth to finance the same consumption stream.

If the rise in asset value is because people expect the income stream to grow a lot in the future, at unchanged discount rates, then indeed Bob is truly more "wealthy" than before. But that is emphatically not the situation of today's market value of wealth in the US, at least on average. If you think internet companies have enormous stock values because their profits will continue to grow at astronomical rates, I have some 1999 dot com stock to sell you.

(A refinement: lower real interest rates do generate a "substitution effect." You should rearrange consumption to be earlier in time rather than later in time. But the central point is that the lower interest rate does not have a "wealth effect." Though the asset is worth more, you cannot consume more in every year than you could before. The original flat consumption path is still just affordable.)

Now there are good questions to be asked about the distribution of consumption, and in particular lifetime consumption. If Bob averages $100,000 consumption over his life, and Sally only $10,000 that's an interesting observation about our society and we might want to think about the economics, politics, justice if you wish and so forth of the situation. But why should we worry about an increase in mark-to-market "wealth" that has no implications for the overall command over resources that "wealthy" people have?

Is this a big effect? Yes. Here is a simple plot of real interest rates, computed as the 10 year bond rate less the university of Michigan inflation survey. It declines from nearly 10% to negative numbers. (If you want to make "wealth distribution" look bad, start capitalizing incomes dividing by zero and then negative numbers!)

In sum, much of the increase in "wealth inequality," to the extent it is there at all, reflects higher market values of the same income flows, and indicates nothing about increases in consumption inequality, or if you prefer "command over resources."

Just why should we carte about wealth inequality?  Obviously, many smart people are very animated by it, including apparently about half the job market candidates on this year's PhD market. What is the question to which wealth inequality is the answer? Stay tuned for part III..

(Note: As a commenter on the last post pointed out, Larry Summers made this point in the excellent

On to Part III

No comments for "Wealth and Taxes, part II - Barokong"