Trade and the Fed - Barokong

Nina Karnaukh of Ohio State sent along this lovely graph of the 6 month Fed Funds futures around the beginning of August. Read this as the market's guess about what is happening to the Federal Funds rate over the next 6 months.

The first drop in price occurs with the FOMC announcement 2 PM July 31. The price drop is equivalent to a a rise in expected future interest rates of about 5 basis points or 0.05%. This has been read as market disappointment that the Fed did not signal more future rate cuts.

The subsequent price spike is this, 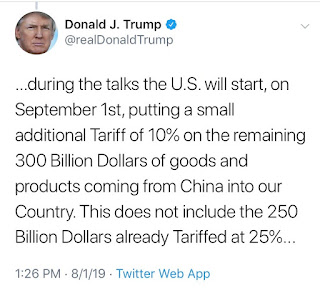 That statement caused a 10 bps rise in price, i.e. decline in expected interest rate.  The natural interpretation: The markets expect the  Fed to lower rates in a trade war, either directly or in response to the economic damage the trade war will cause.

I had read the Fed's recent actions as just a case of late expansion jitters, perhaps with a mild response  to slightly lowered inflation. But this is clear evidence that the market sees the Fed reacting to trade news.

Should central banks offset trade wars? I think this is a question nobody is asking but it needs to be asked. Central banks including the US Fed and ECB seem to take for granted that any reduction in economic activity demands "stimulus" to offset it. But stimulus can only provide "aggregate demand." What if the problem is "aggregate supply" -- an economy humming along at full demand, and then someone throws a wrench in the works, be it a trade war, a bad tax code, or a regulatory onslaught? (I'll stop using quotes, to signal my dislike for these terms.)

Conventional wisdom ways that central banks should not offset reductions in aggregate supply. You can fight a lack of aggregate demand, but monetary policy cannot fight a decline in aggregate supply. The first job of a central bank should be to distinguish demand from supply shocks, so it can react to the former, but not to the latter.  This standard wisdom emanates from the 1970s, where central banks kept rates low to offset the effects of oil price shocks -- supply shocks -- and ended up producing worse recessions and inflation.

Yet expressing this view at central banks these days, people stare at me with blank expressions. Distinguish... supply... from... demand... shocks....why would we do that? The view from about 1960s Keynesianism that all fluctuations in output, employment and prices come from demand, seems to have flowered again.

Now, in this conventional (i.e. 1980 Keynesianism vs 1965 Keynesianism) view the problem with offsetting a "supply" shock is that the monetary stimulus causes inflation. And now we have inflation once again drifting slightly lower. So perhaps the trade war is a "demand" shock? It's hard to see how though.

More plausibly, perhaps the policy uncertainty about the trade war is causing a decline in "demand." Why build a factory if any day now another tweet  could render it unprofitable? The prospect of a trade war -- or the kind of serious political and trade turmoil that would follow Tianamen II in Hong Kong -- is a "confidence" shock. But the uncertainty is genuine. A rise in risk premium in an uncertain environment is genuine. People should hold off building factories that depend on a Chinese supply chain until we know if there is going to be a trade war. Unless the Fed is stepping more and more into the role of psychologist in chief, to decree that such fears are irrational, it's not obvious that the Fed should try to goose investment by artificially lowering the short term rate in response to a  rise in trade fears.

A second possibility arises from more 1980s economics. A "supply" or productivity shock also lowers the expected return on investment. So the real  interest rate should decline in response to such a shock. That is another reason perhaps for some interest rate decline in response to a negative supply shock. But how much? This still does not justify the same response to all sources of output decline, or (in our case) fear of output decline that has not happened yet.

No comments for "Trade and the Fed - Barokong"