In its death note to narrow banks (link toFederal Register where you can post comments;previous post),  the Fed claimed charmingly that retail deposit rates are fully competitive, so we don't need a narrow bank option to help spread the interest on reserves to deposit rates. In the Fed's view, the fact that banks pay so little compared to reserves just reflects the costs (many of them regulatory!) of servicing retail accounts.

"Some have argued that the presence of PTIEs could play an important role in raising deposit rates offered by banks to their retail depositors. The potential for rates offered by PTIEs to have a meaningful impact on retail deposit rates, however, seems very low...retail deposit accounts have long paid rates of interest far below those offered on money market investments, reflecting factors such as bank costs in managing such retail accounts and the willingness of retail customers to forgo some interest on deposits for the perceived convenience or safety of maintaining balances at a bank rather than in a money market investment.

Here is some data. From "The Deposits Channel of Monetary Policy"  by Itamar Drechsler  Alexi Savov  and Philipp Schnabl,The Quarterly Journal of Economics, 132 (2017)1819–1876: 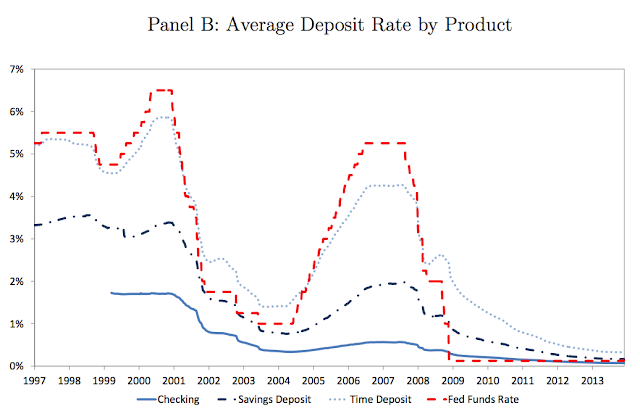 When the Fed Funds rate rises, checking  account rates do not. (It's interesting that savings and time deposits do move more quickly, indicating banks face more competition there.) The Fed's story that the spread between checking account rates and federal funds (now IOER) rates reflects costs is very hard to square with this graph -- why should costs and benefits of checking accounts change over time so much, and coincidentally rise exactly one for one with the Federal Funds rate?

Pablo Kurlat, Deposit Spreads and the Welfare Cost of Inflation plots similar data cross sectionally, which lets you estimate the pass through rate better at the expense of the time pattern: 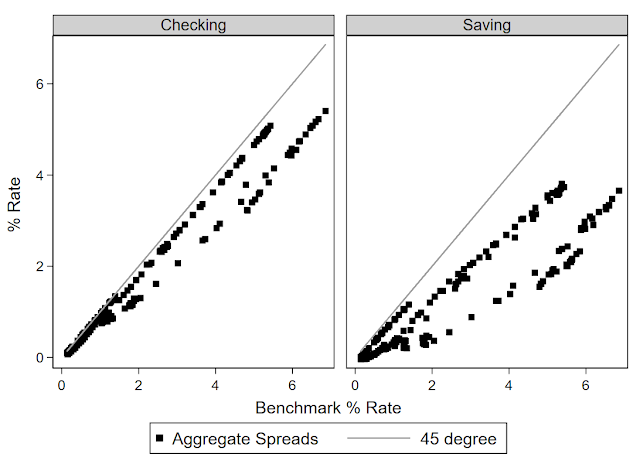 Pablo puts the spread between deposit and federal funds rate on the vertical axis. So, if banks passed through interest rates one for one, the line would be flat. If there were a constant cost, it would be flat but at a higher level. If banks pay the same lousy rate no matter what interest rates are, the curve lies on the 45 degree line. You can see the same general picture.

(Pablo's paper is very nice. He concludes that therefore the "Friedman rule" that interest rates should perpetually be zero, with slight deflation making real rates positive, has yet another thing going for it, that banks are not able to use their market power against us so much.) 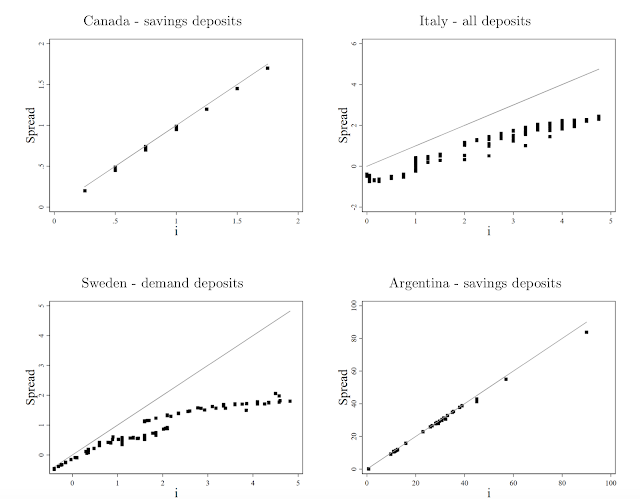 No, it strikes me we have exactly what it seems to be, looking out the window, a heavily regulated not very competitive oligopoly, sort of like airlines 1972.

No comments for "Competitive deposits? - Barokong"