Will the recovery be V shaped, U shaped or L shaped?

The 1918 influenza stood in most economists' memories as the paradigm -- a short, small V shaped slowdown, despite massive mortality. But 1918 was different. People and public policy went about their business ignoring the death toll to a large extent.

François Velde writes about the 1918 Influenza.

Burns and Mitchell (1946, 109) found a recession of “exceptional brevity and moderate amplitude.” I confirm their judgment by examining a variety of high-frequency data. Industrial output fell sharply but rebounded within months. Retail seemed little affected and there is no evidence of increased business failures or stressed financial system... Interventions to hinder the contagion were brief (typically a month)

Of course the fact that interventions were brief has a lot to do with the mildness of the recession. Still,  it was on this historical evidence that most economists thought in February that this might be the great vacation.

I then use high-frequency cross-sectional data to confirm the visible but brief impact of the epidemic and of the intervention measures (closings of certain businesses) that were adopted at the time. Banking data shows a financial sector functioning as it should (increasing loans). Conspicuously, there is no evidence of stressed balance sheets in the nonfinancial sector: business failures were on an uninterrupted downward trend, and cross-sectional data fails to find any effect of mortality....

Here is the picture of a short sharp V shaped 1918 -- followed by the deeper but equally V shaped 1921, not influenza related 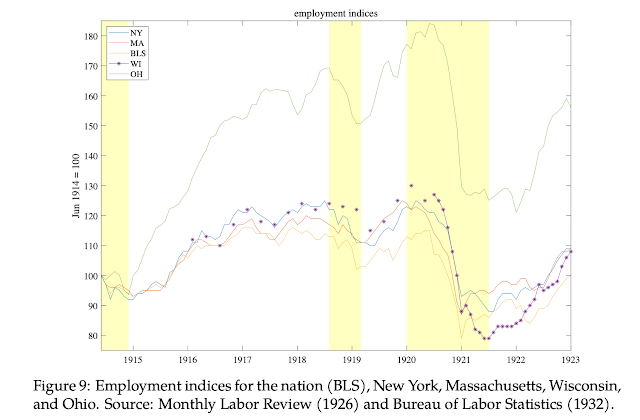 And here is the absence of business failure, all before the CARES act, stimulus, massive Fed lending, and so forth. 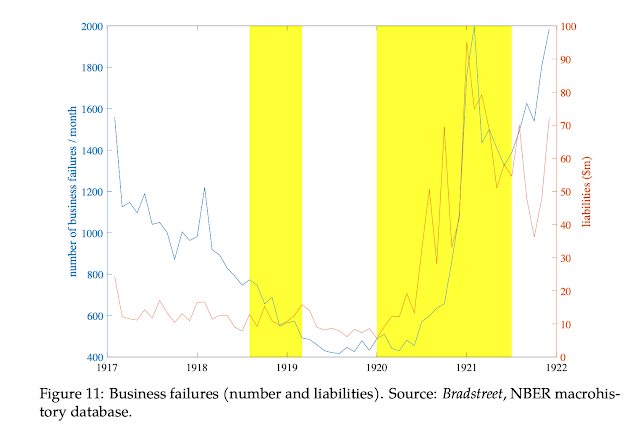 an index of local business conditions from weekly qualitative reports and use it, along with measures of payments volumes, to examine if the speed with which economically costly interventions were put in place made a difference in economic outcomes. I find clear evidence that interventions changed the dynamics of the epidemic and affected economic activity by reducing the number of infected, though broader effects (through a reduction in demand or activity) proves elusive.

Things are not always the same

[Interventions] imposed mostly by cities but sometimes at the state level, took a wide variety of forms ranging from shutting down public gatherings and crowded places to staggering business hours, closing schools, imposing quarantines for infected people, requiring masks, etc. No intervention went as far as closing non-essential businesses, as have the lockdowns of the 2020 pandemic.

Velds goes on to make an important point. There are lots of pandemic macroeconomic models being built at breakneck speed right now. They should fit not only this one -- a massive recession -- but also fit the milder earlier ones.

Sergio Correia, Stephan Luck and Emil Verner writePandemics Depress the Economy, Public Health Interventions Do Not: Evidence from the 1918 Flu

Looking across the US,

more exposed areas experience a sharp and persistent decline in economic activity. The estimates imply that the pandemic reduced manufacturing output by 18%. ...

This differs a bit with Velde. In part they emphasize the longer lasting cross sectional effects, but I'm not sure if that totally accounts for the difference.

We find that cities that intervened earlier and more aggressively do not perform worse and, if anything, grow faster after the pandemic is over. Our findings thus indicate that NPIs not only lower mortality; they may also mitigate the adverse economic consequences of a pandemic.

This is surely true. The way to nip exponential growth in the bud is to stop it early.

Scott Baker, Nick Bloom, Steven J. Davis and Stephen J. TerryCOVID-Induced Economic Uncertainty are much more pessimistic. They use their measures of economic uncertainty, derived from newspaper reports and (panicked) financial markets, fed through a model that relates uncertainty to economic outcomes, to forecast a long, deep recession. 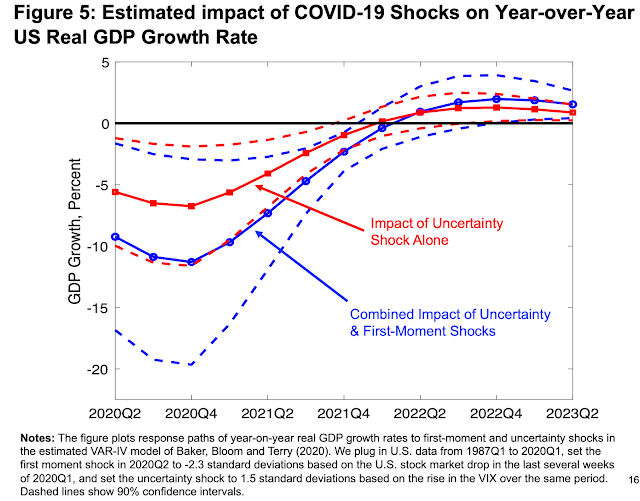 Here too, the past may or may not be a guide to the future. The hope is for a swift all-clear, people return to the jobs they had and businesses reopen, without the agonizingly slow dynamics of a usual recovery. Well, that's the hope.

Regressions with annual information on flu deaths 1918-1920 and war deaths during WWI imply flu-generated economic declines for GDP and consumption in the typical country of 6 and 8 percent, respectively

The death rates were enormous relative to now

150 million deaths worldwide when applied to the world’s population of around 7.5 billion in 2020.

and they note that we are choosing much more economic dislocation to save lives.

However, extreme mitigation efforts—such as widespread cancellations of travel, meetings, and major events—will themselves contribute to the depressed economic activity.

I'm not sure what implications to take for our question.