You will have heard of The Messinian Salinity Crisis no doubt. From learned articles, geology textbooks, probably lectures at your college or University. Or possibly not. This was not always the hot topic it is now. In fact, the very idea of this happening, was for a while, challenged, even ridiculed. It seemed too incredible that this could happen as it did and Dessication/Flood theories took time to gain traction. But, if you had heard about it, you would remember that The Messinian Salinity Crisis, was a time when the Mediterranean Sea, very much as we know it today, evaporated – dried out, almost completely. 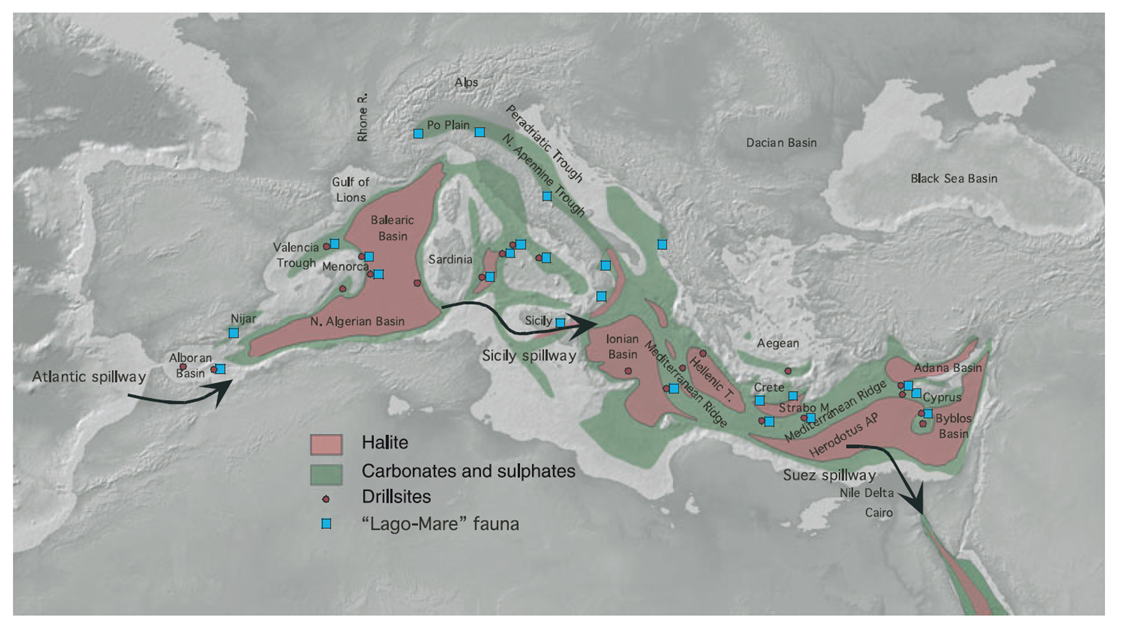 You will have heard of the rates of desiccation, influx and yet more desiccation, repeated in endless cycles over tens, even hundreds of thousands of years. On a human temporal scale, this would have been a long drawn out affair, covering a time hundreds of generations deep, more than the span of Homo sapiens existence. In Geologic terms however, it was a string of sudden events. Of incredibly hot and arid periods followed by rapid ingress of waters, either via spillways through what is now modern day Morocco and the southern Iberian peninsular, or headlong through a breach in the sill between the Pillars of Heracles, the modern day Straights of Gibraltar.

There were prolonged periods of dessication, of desolate landscapes beyond anything seen today in Death Valley or The Afar Triangle. These landscapes were repeatedly transgressed by brackish waters from storm seasons far into the African and Eurasian interiors, or the Atlantic, and these in turn dried out. Again and again this happened. It had to be so because the vast deposits of rock salt, gypsum and anhydrites could not have been emplaced in a single evaporite event. The salt deposits in and around the Mediteranean today represent fifty times the current capacity of this great inland sea. You may have heard too of the variety of salts production, as agglomerating crystals fell from the descending surface to the sea floor, or as vast interconnected hypersaline lakes left crystalline residues at their diminishing margins, as forsaken remnant sabkhas, cut off from the larger basins, left behind acrid dry muds of potassium carbonates – the final arid mineral residue of the vanished waters. 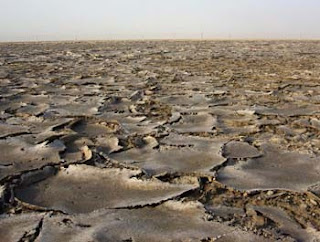 Just under six million years ago, Geologic processes isolated what was left of the ancient Tethys ocean, the sea we know as the Mediterranean, home to historic human conflicts and marine crusades of Carthage, Rome, Athens and Alexandria, a Sea fringed by modern day Benidorm, Cyprus, Malta and Monaco. At a time 5.96 million years ago – evaporation outpaced replenishment. Indeed, just as it does today, but without the connecting seaway to replenish losses. Inexorable tectonic activity first diverted channels, then – sealed them. Cut off from the Atlantic in the West, water levels fell, rose briefly and fell again, and again. The mighty Nile - a very different geophysical feature of a greater capacity than today, and the rivers of Europe cut down great canyons hundreds and thousands of metres below present Eustatic sea and land surface levels, as seismic cross sections show in staggering detail. The cores taken at depth in the Mediterranean, show Aeolian sands above layers of salt, fossiliferous strata beneath those same salts, all indicating changing environments. The periods of blackened unshifting desert varnished floors and bleached playas, decades and centuries long, were punctuated often by catastrophic episodes, with eroded non conformable surfaces of winnowed desert pavement, toppled ventifracts, scours and rip up clasts. Species of fossilised terrestrial plant life, scraping an arid existence have been found, thousands of meters down, in the strata of the Mediterranean sea floor. 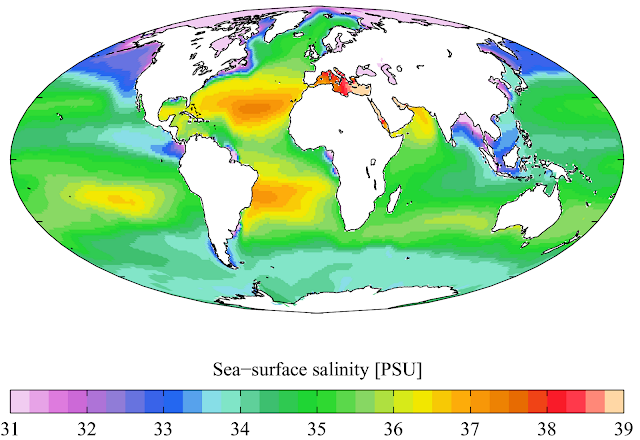 There is much evidence too, in the uplifted margins of Spain, France, and Sicily, of those hostile millennia when the sea disappeared. Incontrovertible evidence, painstakingly gathered, analysed and peer reviewed, demonstrates via the resources of statistical analysis, calculus and geophysical data that the Messinian Salinity Crisis was a period during the Miocene wherein the geology records a uniquely arid period of repeated partial and very nearly complete desiccation of the Mediterranean Sea over a period of approximately 630,000 years. But for the Geologist, the story doesn’t end there. The Geologists panoptic, all seeing third eye, sees incredible vistas and vast panoramas. Of a descent from the Alpine Foreland to the modern day enclave of Monaco, gazing out southwards from a barren, uninhabited and abandoned raised coast to deep dry abyssal plains, punctuated by exposed chasms, seamounts and ridges, swirling and shifting so slowly in a distant heat haze. A heat haze produced by temperatures far above any recorded by modern man and his preoccupation with Global Warming. An unimaginable heat sink would produce temperatures of 70 to 80 degrees Celsius at 4000M depth within the basins. 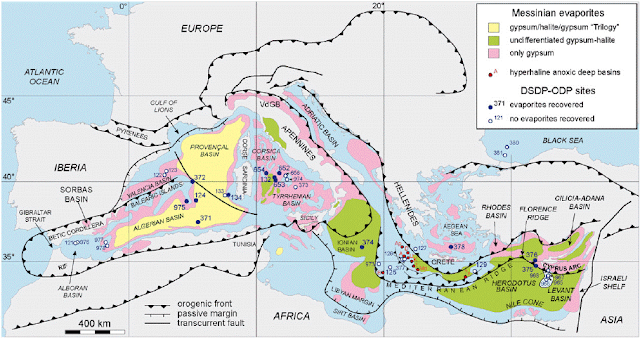 Looking down upon this Venusian landscape, the sun might glint on remaining lakes and salt flats so very far away and so very much farther below. Hills and valleys, once submerged, would be observed high and dry – from above, as would the interconnecting rivers of bitter waters hot enough to slowly broil any organism larger than extremophile foraminifer. All this, constantly shimmering in the relentless heat. Only the imagination of the geologist could see the vast, hellish, yet breathtaking landscape conjured up by the data and the rock record. And finally, the Geologist would visualise a phenomenon far greater in scope and magnitude than any Biblical flood – The Zanclean Event. 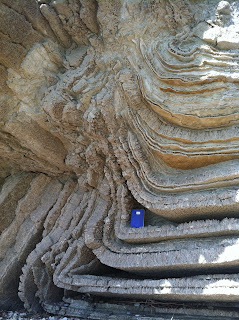 Also known as The Zanclean Deluge, when the drought lasting over half a million years was finally ended as the Atlantic Ocean breached the sill/land bridge between Gibraltar and North West Africa. Slowly perhaps at first until a flow a thousand times greater than the volumetric output of the Amazon cascaded down the slopes to the parched basins. Proximal to the breach, there would be a deafening thunderous roar and the ground would tremor constantly, initially triggering great avalanches above and below the Eustatic sea level as the far reaching and continuous concussion roared and rumbled on, and on, and on. For centuries great cataracts and torrents of marine waters fell thousands of metres below and flowed thousands of kilometers across to the East. Across to the abyssal plains off the Balearics, to the deeps of the Tyrrhenian and Ionian seas, into the trenches south of the Greek Islands and finally up to the rising shores of The Lebanon. The newly proximal waters to the final coastal reaches and mountains that became islands, must have had a climatological effect around the margins of the rejuvenated Mediterranean. Flora and Fauna both marine and terrestrial will have recolonised quickly. Species may have developed differently, post Zanclean, on the Islands. And in such a short period, there must surely have been earthquakes and complex regional depression and emergence. Isostacy compensated for the trillions of cubic meters of transgression waters that now occupied the great basins between the African and Eurasian plates, moving the land, reactivating ancient faults and within and marginal to the great inland sea, a region long active with convergent movements of a very different mechanism.

Hollywood and Pinewood have yet to match the imagination of the Earth Scientist, of the many chapters of Earths dynamic history held as fully tangible concepts to the men and women who study the rocks and the stories they tell. The movies played out in the mind of the geologist are epic indeed and – as we rightly consider the spectre of Global Warming, consider too the fate of future populations (of whatever evolved species) at the margins of the Mediterranean and the domino regions beyond, when inexorable geologic processes again isolate that benign, sunny holiday sea. Fortunately, not in our lifetime, but that of our far off descendants who will look and hopefully behave very differently from Homo Sapiens.

Note: This blog is written and contributed by Paul Goodrich. You can also contribute your blog or article on our website. See guidelineshere.

No comments for "The Messinian Salinity Crisis"