New York City’s multitentacled subway system was a major disseminator – if not the principal transmission vehicle – of coronavirus infection during the initial takeoff of the massive epidemic that became evident throughout the city during March 2020. The near shutoff of subway ridership in Manhattan – down by over 90 percent at the end of March – correlates strongly with the substantial increase in the doubling time of new cases in this borough. Maps of subway station turnstile entries, superimposed upon zip code-level maps of reported coronavirus incidence, are strongly consistent with subway-facilitated disease propagation. Local train lines appear to have a higher propensity to transmit infection than express lines. Reciprocal seeding of infection appears to be the best explanation for the emergence of a single hotspot in Midtown West in Manhattan. Bus hubs may have served as secondary transmission routes out to the periphery of the city 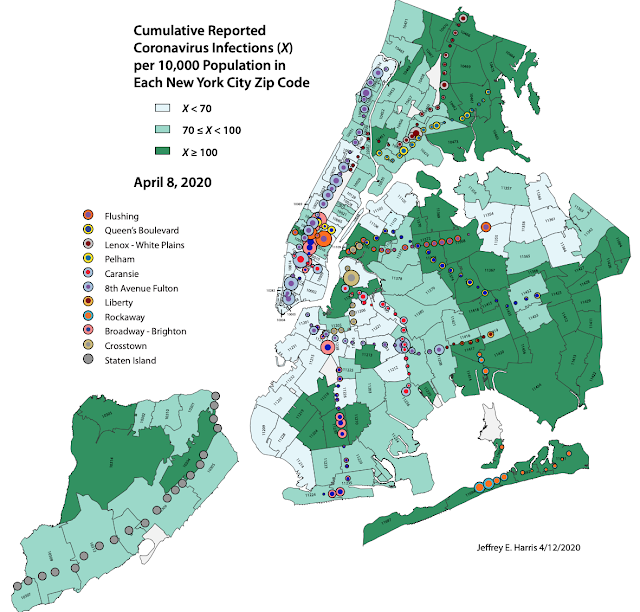 Later in the article

The Metropolitan Transit Authority’s decision to cut back its train service to accommodate the reduced demand may have indeed helped to shore up the agency’s financial position, but it most likely accelerated the spread of coronavirus throughout the city. That’s because the resulting reduction in train service tended to maintain passenger density, the key factor driving viral propagation (Goldbaum and Cook 2020). How ironic it is that, from the public health perspective, the optimal policy would have been to double – maybe even triple – the frequency of train service. The agency’s decision to convert multiple express lines into local service only enhanced the risk of contagion (Goldbaum 2020). How ironic it is that the preferred policy would have been to run even more express lines. We have not seen any public data on the incremental cost of the agency’s decision to begin to disinfect subway cars twice daily. Still, it is natural to inquire why the cars weren’t disinfected every time they emptied out of passengers at both ends of the line.

Why not continually? There are a lot of unemployed people being paid by the government. Why not send a cleaning crew of 10 to continually wipe down each train, monitor mask use, and social distance protocols?

London apparently made a similar blunder.

But how do you shut down the subways in New York City? How do you run subways in a vaguely safe way? If the virus lasts, getting around NY is going to be a mess for a long time.

No comments for "Subways and virus - Barokong"