Cyanobacterial stromatolites usually are grouped in the Phylum Cyanophyta- Precambrian (Archean)-Recent Classifi cation of other microbes is complex, uncertain, and ever changing (generally placed under the Prokaryotes, but most of these organisms are really best considered as “microproblematica”). Organisms once termed blue-green algae are now generally termed cyanobacteria.

Ranges of some specifi c calcimicrobes depicted in this section:

Marine forms are mainly aragonitic; incorporated detrital components can have any carbonate or terrigenous mineralogy; lacustrine forms are mostly calcitic.

Most are uncalcifi ed and the remainder have “nonskeletal” or “extraskeletal” calcifi cation largely incidental to their growth.  Calcifi cation results from biochemical processes (removal of CO2), but generally is not necessary for, or benefi cial to, the organism’s survival.

Lamination in stromatolites refl ects microbial growth through day-night cycles and tidal cycles; those organic laminae commonly are interspersed with micritic or peloidal carbonate or terrigenous detritus that was deposited during episodic storms.

A stained biological preparation of Anabaena sp. These spherical cyanobacterial bodies (formerly termed blue-green algae) are linked up into chains. Such coccoid microbes, in combination with filamentous forms, are common in modern stromatolites. The oversized purplestained cells are nitrogen-fi xing heterocysts. Figure below

A stained biological preparation of Rivularia sp.-a fi lamentous cyanobacteria.  The individual cells are stained purple and the mucilaginous sheaths are stained green.  A meshwork of such interlocking filaments is effective in the trapping of terrigenous and/or carbonate particles in microbial mats through a baffling effect as well as by adhesion to the slightly sticky mucilaginous sheaths. Figure below.

An SEM image of an aragonitic “dumb-bell” that is believed to have formed around a clump of bacteria.  Similar structures have been produced by bacterial action under controlled laboratory experiments.  Large calcite crystals are visible in the background. Figure below

An SEM image of a lightly etched travertine displaying probable bacterial rods (well displayed in the area indicated by the black arrow) that were encased within calcite crystals.  Bacterial fossils are relatively rare, their preservation potential is poor, and they have been conclusively identified only in shrub and shrub-related structures; thus, shrubs (shown later) are the most diagnostic bacterial structures. Figure below

A chert nodule from a supratidal microbial laminite showing silicifi ed cyanobacterial filaments (black arrow points to one of many examples) and coccoid cells (white arrow).  Microbial remains have been identified from many localities in Precambrian rocks extending well back into the Archean. Figure below

Modern and ancient stromatolitic structures are found in a wide variety of growth forms.  The main types are shown schematically in this classification.  Most stromatolites are composed of laminae of trapped carbonate and/or terrigenous sediment; generally they are easier to recognize on outcrop, or in polished slabs, than in thin section.  Skeletal elements are rarely found in stromatolites although they are organosedimentary structures probably created primarily by sediment-trapping microbial mats. Figure below 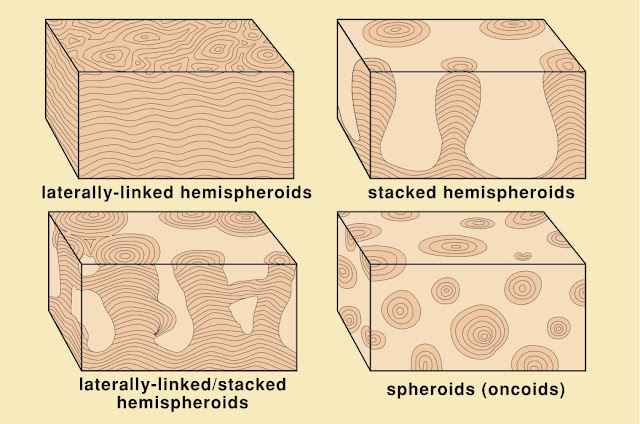 A well developed ancient example of a laminated and contorted stromatolite (loferite). The dark reddish-brown color (refl ecting signifi cant preservation of organic matter), slightly pelletal texture, irregular lamination, and elongate (“birdseye” or fenestral) pores are characteristic of stromatolites, but are not always this clearly displayed. Although the stromatolite fabric most likely represents growth and sediment trapping in and on a microbial mat, no microbes were recognizable in this deposit (as in most such stromatolites). Figue below

Detailed texture of a typical intertidal stromatolite with interlamination of organic zones (cyanobacterial fi laments, mangrove remains, and other organic detritus) and zones of transported and trapped detritus.  The trapped materials include carbonate fecal pellets and microbial peloids as well as various skeletal fragments, especially bivalves, gastropods, and benthic foraminifers.  Note the pronounced fenestral fabric that is characteristic of such intertidal stromatolite deposits. Figure below

A stromatolite from a hypersaline lake (a coastal salina).  Note microbial peloids and encrusted filaments forming small, incipient branching structures.  Peloidal “shrubs” normally are not so well preserved, but more typically disaggregate, contributing to the peloid content of such mat deposits. Figure below 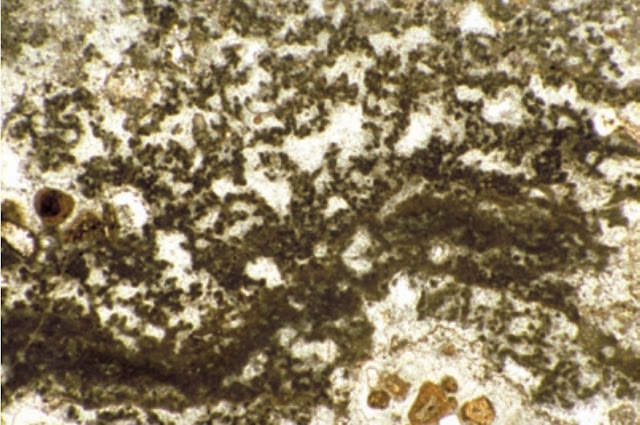 A columnar, stromatolitic boundstone or biolithite (original up direction toward the right).  Digitate or columnar stromatolites are typically of subtidal origin, unlike the nearly planar mats of previous images that form primarily in intertidal settings.  The lamination in both types of mats, however, results mainly from alternating episodes of microbial growth and entrapment of transported sediment. Sample from Robert Laury. Figure below

A stromatolitic crust atop a marine hardground.  The lumpy, digitate, laminated crust is largely phosphatic, hence the brownish color in planepolarized light and the nearly isotropic appearance in cross-polarized light.  Although a biotic origin of such structures is likely, it is difficult to prove in the absence of preserved microbial remains. Figure below

A stromatolitic or thrombolitic deposit showing typical contorted laminations that were substantially disrupted by the growth of evaporites. Intertidal stromatolites that grow in arid regions are commonly associated with gypsum, anhydrite or halite crystals or crystal fragments formed by the evaporative concentration and infi ltration of water trapped on original mat surfaces. Figure below

Microbial growth can form nodular structures, as in this Girvanella oncoid (a pisoid of bacterial/algal origin), particularly in areas of at least episodically strong wave or tidal action. The irregularity and contortion of laminations and the preservation of internal filamentous fabrics are the main clues to a microbial (probably cyanobacterial) origin of such grains. Figure below

A close-up view of a Girvanella oncoid displaying well developed tubular structure. Note the interfingering of individual filaments and the selective precipitation of dense, micritic carbonate around the fi lament sheaths. It is necessary to view thin sections at maximum magnifications in order to see such filamentous structures and demonstrate a probable microbial origin for particular pisoids. Figure below

These are peloidal, calcitic, probably microbial branching growths that formed in association with basaltic pillow lavas.  The microbes grew atop glassy, zeolitic, pillow rinds (the yellow material at the bottom of the photograph) and extended into open inter-pillow cavities.  These shrub-like growths were later encased in sparry calcite cement, but where uncemented they commonly fall apart, generating large volumes of small micritic peloids. Figure below

Dendritic growth forms of the widespread calcimicrobe or microproblematic organism, Epiphyton.  This genus has distinctively thick, solid branches. It commonly forms unusually large growths that can be a substantial rockforming element in association with other framework organisms. Figure below

Another view of dendritic growths of Epiphyton, a possible cyanobacterial organism. This genus is quite common in Cambrian and Ordovician carbonate strata and has been described from rocks as young as Devonian. Figure below

Lumpy, peloidal accumulations of the microproblematic genus Renalcis, a possible cyanobacterial organism, here encrusting a finger-shaped stromatoporoid. This genus is widespread in Cambrian through Devonian strata and formed small, self-supporting growths as well as encrustations that may have helped to bind other framework organisms. Figure below

A small branching cluster of Renalcis in an allochthonous block of reef within marginalslope deposits. Note the characteristic dense micrite within the stacked, branching, domal growth stages. Figure below

A biolithite with iron- and iridium-rich, calcifi ed digitate growths of Frutexites, a possible cyanobacterial form. This deposit formed just above the Frasnian-Famennian boundary, a time of widespread extinction of many higher organisms. Figure below

Calcified. microproblematic, densely branching growths. Such calcified arborescent remains have been considered as microbial by some workers and as green algal by others. The examples shown here were formed and preserved in shallow-marine areas with exceptionally high rates of marine cementation. Figure below

Many structures formed by microbial organisms have problematic phyletic assignments. As noted earlier, some of the most characteristic microbial fabrics are branching or shrub-like features.  In this example, an Ortonella-type alga has formed a radiating cluster of calcified tubules. A number of similar species with tubular structures are differentiated mainly by their branching patterns and are classed by some as microbial structures, but by most workers as codiacean green algae. Figure below

A close-up view of Archaeolithoporella, an important encrusting microproblematic organism in Permian reefs (commonly in close association with Tubiphytes and interlaminated with synsedimentary marine cements).  It has been classed as a calcimicrobial deposit by some workers, and as a red alga by others. Figure below

Finger-shaped to domal stromatolites of a lacustrine alga, Chlorellopsis coloniata (described as formed by unicellular coccoid algae of uncertain affinities).  The laminated, domal or digitate structures are typical of stromatolites created by the trapping and binding action of organic mats, even if the sporangial features (the layers of small spherical bodies visible throughout the columns) are not.  The entire rock has been replaced by chert in this example. Figure below

A colony of Collenella guadalupensis forming a finger-like or domal skeletal structure that is part of the reef to near-backreef framework. The columns, which are composed of precipitated, not trapped calcium carbonate, are surrounded by typically fossiliferous, shelf margin carbonate detritus.  Although viewed as a microbial deposit by some, it has been described as a probable stromatoporoid by others. This genus is known only from Upper Permian strata. Figure below

An example of “clotted” fabric possible bacterial crusts in a sponge reef.  Patchy, dark, micritic or peloidal accumulations, commonly found in association with sponges or other framework organisms are frequently interpreted as microbial precipitates although absolute evidence of a microbial origin is very hard to fi nd.  The darker patches of microbial material are surrounded here by normal micritic carbonate sediment. Figure below

Dense, micritic masses (dark material) that may have formed around now-leached or decomposed grains.  This microproblematicum has been classifi ed as Thartharella sp. and it may be a cyanobacterial product (although, as with most problematic forms, it could also have other origins).  Such micritic and peloidal encrustations are especially common in rocks of this age although they can be found essentially throughout the Phanerozoic rock record. Figure below

Credits:  Peter A. Scholle and Dana S. Ulmer-Scholle (A Color Guide to the Petrography of  Carbonate Rocks)

No comments for "Calcimicrobes/Cyanobacteria (Blue-green Algae)"