When the Fed stepped in, were corporate bonds "illiquid," the market "dysfunctional," or were the prices just low, as they should be in advance of a Great Recession with larger bankruptcy risk? Did the Fed "liquefy" the market, "intermediate," grease the wheels, or is it just buying, and propping up prices so that bondholders can dump bonds on the Fed before things get really bad?

I asked for evidence on bond market liquidity in my last post on the topic, "Bailout redux," and Pierre-Olivier Weill passed on a paper he has recently written with Mahyar Kargar, Benjamin Lester, David Lindsay, Shuo Liu, and Diego Zúñiga,Corporate Bond Liquidity During the COVID-19 Crisis. 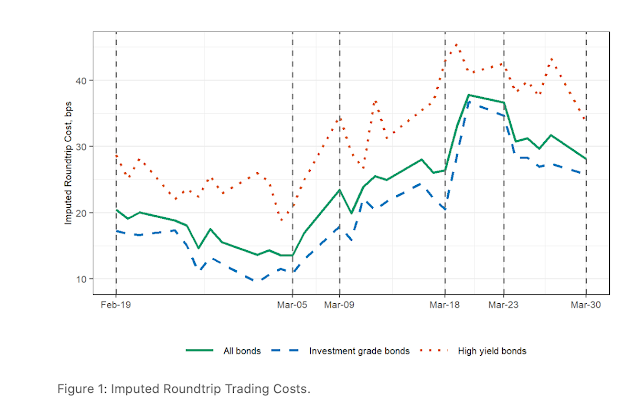 Here is their estimate of roundtrip trading costs -- if you buy and then sell, how much do you lose in bid ask spread. Feb 19 is the stock market peak.  March 18 is the day after the Fed announced it would lend money to broker-dealers and take bonds such as these as collateral. March 23 the Fed announced it would buy corporate bonds on the secondary market, and buy directly from companies issuing new corporate bonds.

So, yes, by this measure, corporate bonds did become less liquid. But they should get less liquid. This is a period of higher risk, so a trader who is going to hold a bond for a few days needs a better price. And this is also a period of more asymmetric information, so bid ask spreads should be higher. Is it really a disaster meriting several hundred billion dollars of printed money that dumping a corporate bond costs you 0.12% of its value (half of 25) rather than 0.07% (half of 15)?

The time pattern is also interesting

Transaction costs continued to rise through the tumultuous week of March 16-20, despite the announcement of the PDCF (along with additional facilities on March 18), but fell after the March 23 announcement of the Primary and Secondary Market Corporate Credit Facilities.

Because, despite, and coincident with are not all the same thing. I am interested that by these measures even the Fed's intervention in one case seemed to go the wrong way, needing a "despite," and in the other did not immediately still the waves.

Dealers work in two ways: they buy on their own book, taking the risk for a few days and then selling, or they arrange trades between buyers and sellers, taking a fee and no risk. The next graph shows the proportion of agency trades. 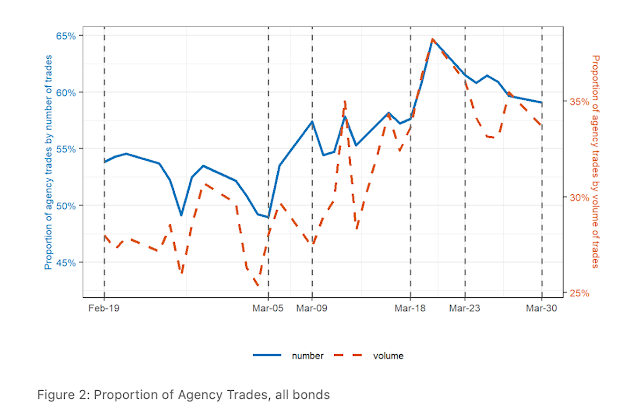 Consistent with the idea that intermediaries are not hot to take bond market risk on their own books, agency trades are rising, though by a grand 15 percentage points. 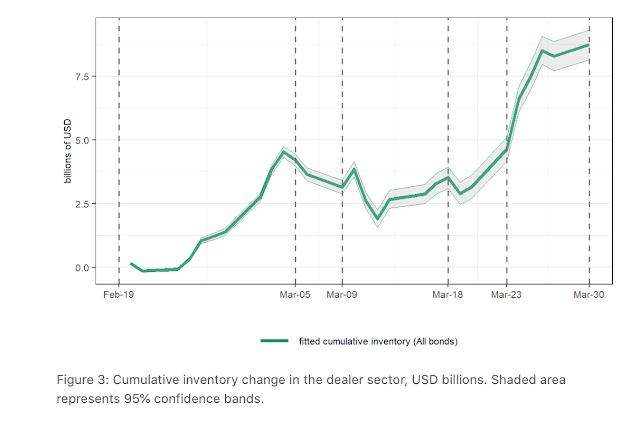 Dealers were accumulating inventory until March 5, wound it down (sensibly) as markets were tanking.

The figure reveals that dealers absorbed some inventory in late February, before financial markets began to fall rapidly on March 5. At that point, dealers stopped absorbing bonds, and even began to shed some of their inventory despite immense selling pressure.

Well, that is what dealers are supposed to do! They don't hold forever, they buy at low prices and hope the prices bounce back. They're intermediaries, not speculators.

That inventory takes off after March 23 confirms, I think, the story we're hearing. The Fed, by buying large net quantities, is telling the dealers that there is a lower price limit it will not let corporate bonds go below. Then the dealers can buy, knowing they only have upside risk. From the Fed's point of view, this is "liquefying" a market.

As uncertainty surrounding downgrades and potential defaults grew during the first weeks of March, and withdrawals from corporate bond funds mounted, we find that dealers became increasingly unwilling to absorb inventory onto their balance sheets. As a result, dealers attempted to shift some activity from principal to agency trading and, among the remaining principal trades, they charged a significantly higher price to provide immediacy.

We haven't quite shown that. As above, trading costs should rise as the risk of holding securities and asymmetric information both rose. But even if so, per my previous post, why is there so little "balance sheet space?" Why do dealer banks not routinely keep some dry powder, some extra equity, on their balance sheet just so they can make a killing in a time of great volatility? After all, if this is true, the potential profits from having some balance sheet space, rose tremendously. And where are the hedge funds, and other high frequency traders? Have they no balance sheet space either?

We still haven't really answered the question. Is a rise in the cost of dumping your corporate bonds from 0.07% to 0.12% really a social disaster?

Though these are problems of "intermediation," the Fed is clearly not "intermediating," both buying and selling, helping to lower transactions costs at any (even low) price. The Fed is a net buyer, trying to prop prices up.

And if anyone has the high frequency data, I would like to see just what trouble the Fed saw in Treasury markets, causing the Fed now to buy all the Treasury is issuing and more. Is the Fed just "liquefying" or is the Fed propping up Treasury prices? The Fed is supposed to buy from markets not the Treasury, so that we see market prices for Treasury debt. But if the Fed is deliberately propping up prices for Treasury debt, the line between direct monetization and secondary purchase is quite blurred. Sure, the Fed buys only from private parties. But if it announced a price, the private parties would know just what to offer the Treasury!

No comments for "Bond liquidity - Barokong"